After many years of waiting and anticipation, Tesla is finally adding Apple Music to its cars.

Aaron Cash shared photos via Twitter of Tesla’s new exhibit at the Petersen Automotive Museum in Los Angeles, which opened November 20, 2022. Aaron found that Apple Music was included in one of Tesla’s vehicles.

At the exhibit, Tesla has the interior of the new Model S set up, complete with a center console, steering wheel and infotainment system so that attendees can experience the yoke steering wheel and its blazing-fast processing for maps, games, and entertainment.

The ‘vehicle’ was running a developer version of Tesla’s OS with version number 2022.40.50, and this is where Apple Music was found.

Tesla’s notorious for leaving Easter eggs and hints about upcoming features in their software, and having this vehicle run a developer version with Apple Music appears to have been intentional. We first speculated that Apple Music was coming when an icon was spotted during Zoom’s conference where they showcased their video conference running in Teslas.

According to the software menu in the vehicle, the vehicle’s VIN was set to ‘P3TERS3N1P000BUCK.

Tesla will be integrating Apple Music into their music player, instead of actually running an Apple Music app, which has both, positives and negatives. On the positive side, the UI will be consistent and similar to Tesla’s other music offerings, and its expected to support Tesla’s voice commands as well. However, it could mean that not all Apple Music features may be available.

Apple recently announced that Apple Music would support Spatial Audio in some vehicles. In addition to Spatial Audio, Apple Music also supports lossless audio for a variety of music. Apple describes these features as creating an immersive audio experience that produces “true multidimensional sound and clarity.”

It’s not clear whether Tesla is implementing Spatial Audio or lossless audio support in their implementation of Apple Music, but we may be limited to the core features. Tesla currently supports high-quality audio with TIDAL.

The Tesla release notes for the inclusion of Apple Music have been shared on Twitter by TeslaRaj. Although they don’t reveal much, it does confirm that you’ll need Premium Connectivity to stream Apple Music over cellular, or use WiFi, either while parked and connected to a local access point or using your phone as a hotspot. You’ll also need a subscription to Apple Music. It does not mention Dolby Atmos or lossless audio, so it’s a real possibility that those options are not included, at least upon Apple Music’s initial release. Tesla’s release notes are as follows:

Stream over 100 million songs and 30,000 playlists ad-free. Listen to your entire library, discover more music, and tune into live radio stations. To access Apple Music, tap the Apple Music icon in the Application Launcher, scan the QR code with your mobile device, and login with your Apple ID.

Note: A Premium Connectivity subscription is required to stream Apple Music over a cellular connection. 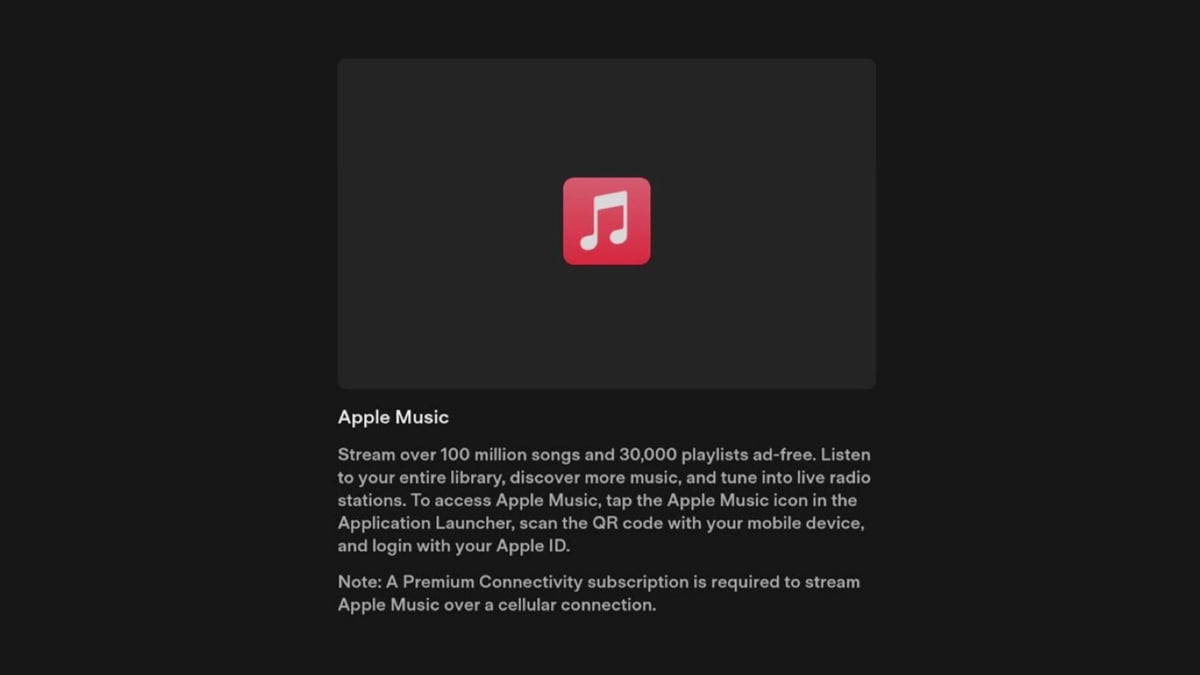 There is no official release date for Apple Music, but the wait should not be long. It’s highly anticipated that Tesla will add Apple Music with this year’s holiday update, which is expected later next month.

Last year Tesla released a holiday update that included the ability to create custom light shows, a new UI, a customizable launcher, the addition of the blind spot camera and more. This year’s holiday update is expected to include a variety of new features as well.

Apple Music, which surpassed 100 million songs back in October, is one of the last major streaming services to be added to Tesla’s vehicles. Currently, Tesla offers Spotify, TIDAL, Slacker Radio, TuneIn, and SiriusXM (Model S/X only). To stream music through any of these services you’ll need to be subscribed to Tesla’s Premium Connectivity for $9.99/mo. 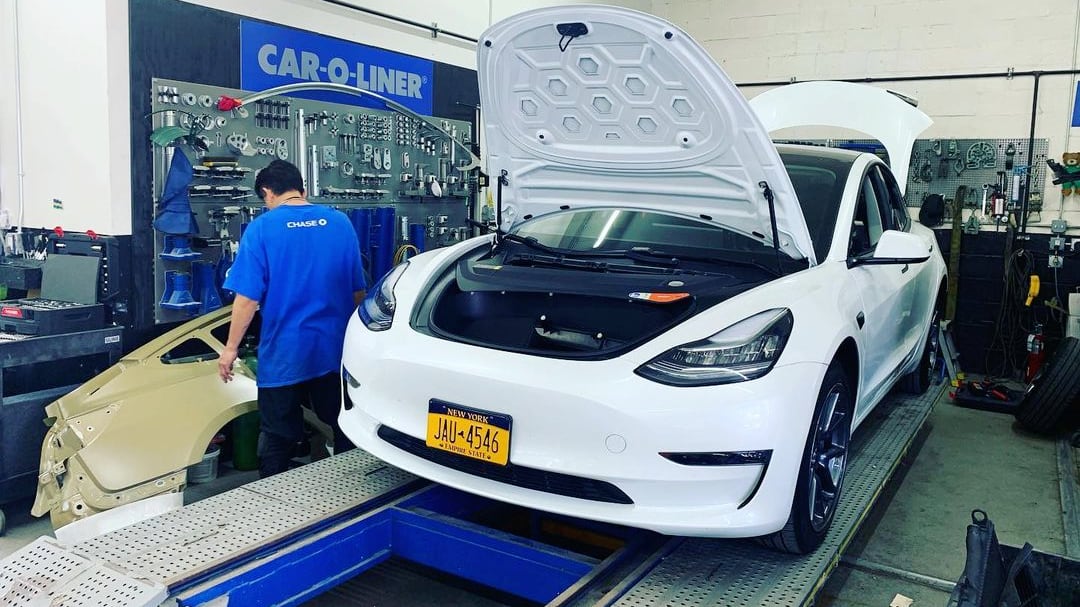 In an ironic twist, Tesla’s soaring popularity has helped a repair shop that’s been around for over a century. During General Motors Investor Day, the company’s President, Mark Reuss, said, “That’s a growing business for us. I gotta say it’s a new business,” according to Barrons. He was referring to servicing Teslas at GM facilities. The car company, which has been around since 1908, has repaired more than 11,000 Teslas since 2021 in the United States.

While not happy to be losing the business on the service side, Tesla must be relieved that its owners have access to repairs at a company that has thousands of service centers across the country. Tesla has increased production, getting more of its in-demand vehicles on the road; however, it takes much longer to have facilities built and employees trained to service these vehicles.

Recently, internal documents showed that the company was going to introduce a process allowing salvaged Tesla to be recertified and allowed back on the Supercharger grid. That may increase the number of Teslas that need to be worked on. Improvements to service have been on Tesla’s radar for some time. Last year, Musk said that the company was expediting service center openings to keep up with the exploding demand for the product.

Musk Was Focused on Service

In September, Elon Musk said that he was focused on improving service. A Twitter user complained about a recent service appointment being canceled on short notice. Musk responded: Note, I am putting a lot of time personally into advancing Tesla service to make it awesome. Hopefully, this is starting to be felt by Tesla owners.

The user also pointed out that Tesla can charge $100 for canceling an appointment with less than 24 hours’ notice, but there was no penalty when the company cancels with short notice. Musk tweeted: You’re right, we should credit Tesla owners $100 if we change appointments with less than 24 hours notice. Should be reciprocal. On June 4, 2022, he tweeted: Working on Tesla North American service. Goal is 2/3 of cars receive same-day service, no wait.

But since those tweets, Musk has had a lot of attention taken to running his new company – Twitter. It’s unclear how long he will be running Twitter or when his full attention will return to Tesla and improving service.

While more facilities have opened, many Tesla owners are clearly finding it more convenient to go to the neighborhood GM dealership. This ironic twist may provide some short-term relief. Still, Tesla must continue building and staffing more service centers to keep owners happy and persuade prospective buyers to consider the electric car pioneer when purchasing their next vehicle. 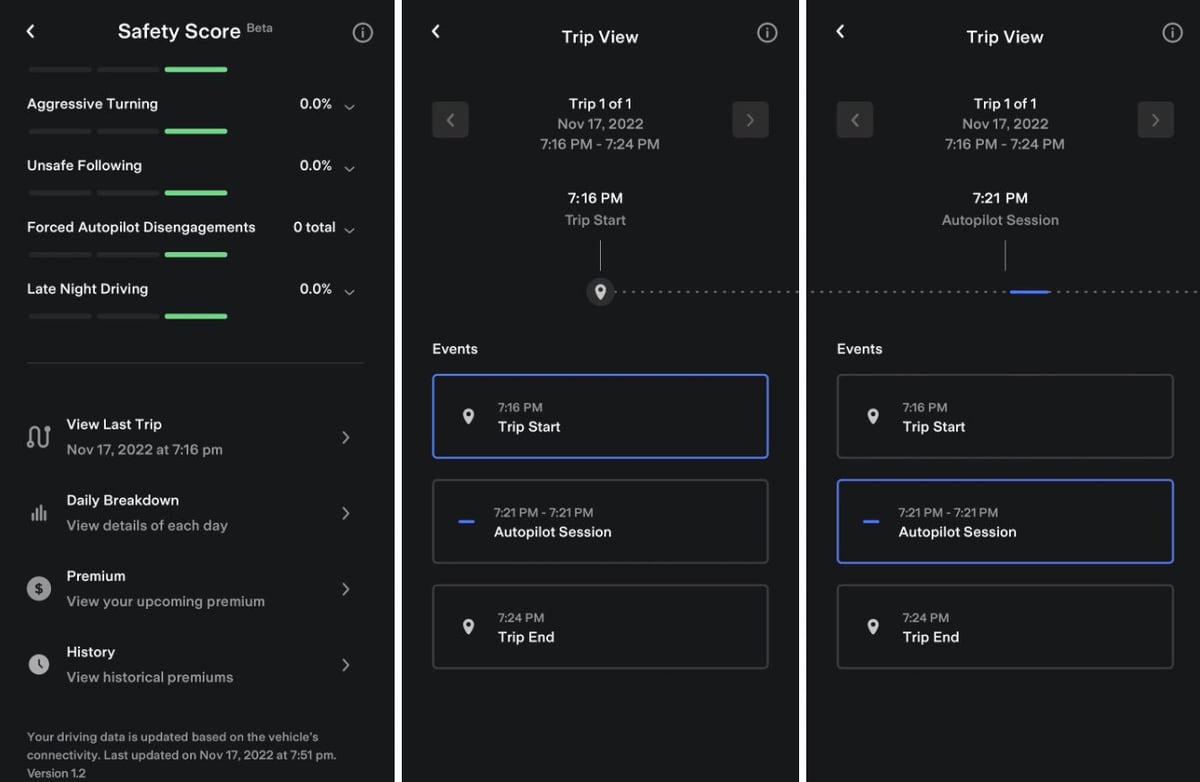 Tesla has updated its Safety Score feature to version 1.2, which adds late-night driving as a factor, among other things.

Since the Safety Score feature launched, Tesla has had a handful of improvements. Version 1.2, however, is the function’s biggest update yet. This update will hopefully address a number of the concerns drivers were having before about how the score was calculated.

Tesla uses the Predicted Collision Formula (PCF) to calculate all of the above factors. This formula predicts how many car accidents may happen per 1 million miles driven.

This new version 1.2 adds features like a visualization of your trip (without location data to protect privacy), Late Night Driving and an increased grace period from three to five seconds.

Here is a list of the changes to Safety Score:

The reason Tesla has added this as a safety factor is that driving at night can be more dangerous due to reduced visibility, tiredness, and distractions.

According to the National Safety Council, most fatal accidents occur between 4pm and 11:59pm, with Friday, Saturday, and Sunday being the most frequent accident days.

Tesla’s new trip visualization feature in version 1.2 is also a welcomed improvement. Previously, drivers were not given detailed feedback about their drives. Instead, they were just given an adjusted score. Trip visualization will show drivers when their trip started, when Autopilot was engaged/disengaged, the time of the infraction (if any), and when the trip ended.

These insights will hopefully allow drivers to reflect on each drive and correct any aggressive driving in order to receive Full Self-Driving beta.

Although Tesla has launched Safety Score v1.2, some drivers will remain enrolled in the original version. You can see which version you’re enrolled in by scrolling to the bottom of the Safety Score screen.